The Case of Too Many Isaacs
Have you ever come upon some information that was published in a book by credentialed individuals and assumed that because they said it was so, it must be? I’m sure that at one time or another we’ve all done that. But can authors make errors? Yes. There are some cases where the only people who might be able to spot such a mistake are those who have first-hand knowledge of a family’s history because it is their own. When presented with what appears to be a find, they accept it as a clue and take it to the next level.
It’s a bit like being a detective.
This latter group of researchers is familiar with the names associated with their family. When a clue is revealed, they possess the instinct to know if the information is sound, or if there might be some room for interpretation. Such was the case of Isaac Carter’s Revolutionary War record. (March 2008)
My husband’s CARTER ancestry takes us back to colonial North Carolina, to New Bern in Craven County. His 3rd great-grandfather Isaac Carter, Sr. was born a Free Person of Color about 1760 and married Sarah Perkins, on February 3, 1786. She was the daughter of George Perkins and sister of Isaac Perkins. You can see them enumerated here on the 1790 Census. 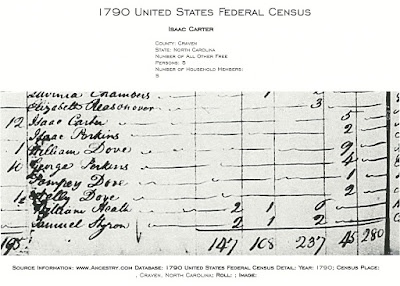 Isaac Carter' family of five (5) were living adjacent to his brother-in-law Isaac Perkins (2) and two up from his father-in-law, George Perkins (4). Note that the only record was the total number of All Other Free Persons of Color living in the household.
Following the 2007 George Family Reunion in North Harlowe, NC, my husband and I paid a visit to the Kellenberger Room at New Bern-Craven County Public Library. After giving some background information to Local History Librarian, Victor Jones, Jr., he immediately pulled Paul Heinegg’s award winning book, Free African Americans of North Carolina and Virginia, 3rd Edition, 1997.

Isaac Carter, called a "Mulatto" in his Revolutionary War pension application, enlisted in the 8th North Carolina Regiment on 1 September 1777, was taken prisoner, and was discharged on 20 February 1780 [Crow, Black Experience in Revolutionary North Carolina, 98]. He was head of a Craven County household of 5 "other free" in 1790 [NC:131]. <<http://www.freeafricanamericans.com/revolution.htm>>

There it was. Our Isaac Carter recorded in the 1790 Census had served in the Revolutionary War. But that was too easy. I decided to stay on the trail and examined the next clue.

I went to my home library's North Carolina Room and checked the original citation in Jeffrey Crow’s book, but it didn’t record any more information than the transcription which Heinegg had cited.
Believing that there had to be more information somewhere to identify this Isaac Carter as ours, I started looking at sources detailing the 8th North Carolina Regiment . . .

Set up on a blind date...
...it was love at first sight.
My parents' story is one of obstacles overcome...a testimony that true love does exist and that it can last until death do us part.
Richard Allen Newton was born on April 10, 1933 in Binghamton, NY to Francis & Harriet (JONES) NEWTON, their first-born. His father was the son of an English farmer of Binghamton, NY, and his mother the daughter of a Welsh coal miner of Scranton, PA.  Dad always said that it was his mother who had encouraged his talents by providing art instruction and drum lessons. About a year or so after his graduation from Johnson City High School, Dad enlisted as a Certified Regimental Drummer in the Air Force Drum and Bugle Corps. http://usafdrumcorps.us/pages/historymain.html
Doris Shirley Silverman was born on June 15, 1930 in Easton, PA to Mark & Abbie Simmons (KING) SILVERMAN, their first-born. Her father was the son of Orthodox Jewish immigrants from the Russian Empire (now Lithuania), and her mother was the daughter of English parents from Rhode Island. Her paternal great grandfathers, David Silverman (the first Cantor and acting Rabbi) and Wolf Weisfield were among the founders of Bnai Abraham Synagogue in Easton, PA. http://www.bnaiabraham.org/history.html Following graduation from Easton High School, Mom pursued her goal of becoming a career woman as a proofreader of technical journals at Mack Printing.
Two of Mom's school chums had married, relocated, and were stationed at Bolling Air Force Base in Washington, DC, where my Dad was stationed. Dad and Donald became friends, and at their urging, Dad agreed to come home with them to Easton on their next furlough to meet a girl they thought would be just right for him.
It was love at first sight.
When Dad went to her house to pick her up for their double date to the Boy Scout Jamboree, Mom said she thought he was so cute that she forgot her name! And Dad got so flustered that when my grandfather came in with the dry cleaning in his hand, he offered to take the garments from him, thinking he was the delivery man from the cleaners! In spite of their initial reactions...or perhaps because of them...they were soon to discover that their destiny was sealed.
When my grandfather found out that her beau was only 19-years-old, she being 2 years and 10 months older, he told them that they could no longer see each other until that young man was 21. He was afraid that the white slavery laws of the time might interfere with his daughter's well-being, and he wasn't taking any chances. Mom said,
Dick was such a little guy, and Daddy was a big, strapping laborer who had worked hard all his life; but your Dad told him, "Mr. Silverman, I'm going to keep seeing your daughter until she tells me otherwise." So Daddy said that if we agreed that we could see each other in our living room
until your Dad turned 21.
So Dad would hitch-hike from D.C. to Easton every furlough he got just to spend time with Mom, and every date thereafter took place in her living room...with the exception of one anniversary dinner...and was chaperoned by her father.
There was just one more obstacle to overcome before they could be married. Although Dad was raised in a Baptist home and accepted Christ in the Primitive Methodist Church, in the service he had become a practicing Catholic [that's another story]. Mom agreed to convert to Catholicism, but when the priests told her that she would have to declare that the Catholic Church was the one true church and denounce her parents, she could not find it in her heart to do that. Dad asked her if she wanted him to become Jewish, and she said no. Ever since she was a child and had heard the song, Jesus Loves Me, she had wanted to know more about Him but never wanted to break her Daddy's heart. They decided to visit Wesley Methodist Church in Phillipsburg, NJ. Even her father liked the Reverand Mabry.

When Mom's friends and co-workers heard that she would be leaving her well-paid job at Mack Printing to move to Washington, DC, they thought she was crazy. But love will do things to you like that.
And they lived happily ever after.
I'm not saying that there weren't difficult times ahead. They faced many obstacles together, but they were always content so long as they were together.
Dad died two months before their 50th Wedding Anniversary of metastatic optic melanoma, yet the family history project continues. He is missed, but never forgotten. We love you, Dad!
Happy 56th Wedding Anniversary!!!