What do you do when you run out of documents?

A little imagination goes a long way, but...

when it's all said and done, documentation can leave big holes in your family time line!

From the last known record of Isaac and Rhoda alive on October 8, 1850 to the day in September 1853 when the Justice of the Peace ordered the Sheriff to serve notice for Rhoda's parents to appear in Court with their grandchildren, there were one thousand seventy days...

A lot can happen in the life of a family in two years, eleven months and four days...

Unfortunately, none of the New Bern newspapers between those dates have survived. I suppose I could use a similar tactic in locating news reports from neighboring communities using a method valued in New England when tracking westward migration patterns...by drawing concentric circles, graduated in 25 mile increments...I will be able to more closely identify sources of regional news.

Instead of using paper, pencil and a drafting compass, Google Earth works ideally for this purpose. As you can see below, Vector 1 reached only half-way between New Bern and the next largest cities.

Vector 2, a 50-mile radius from New Bern, included Jacksonville and Greenville; however, neither of these cities had newspapers published within the time period.

Vector 3, 75 miles from New Bern, included the cities of Goldsboro and Rocky Mt. Neither of these proved of any value. 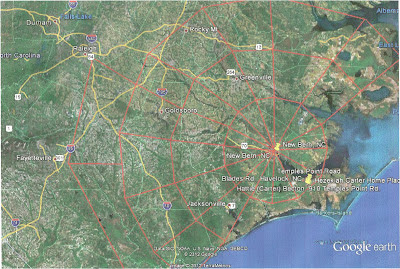 Vector 4, 100 miles from New Bern, nearly reached the cities of Fayetteville and Raleigh. Of all the cities mentioned above, only Raleigh had newspapers published within the time period of 1850-1853.

In time I will try to request microfilm reels via Inter Library Loan; however, scheduling constraints have generally limited me in that area. Purchase might prove a better plan. I had been advised just a couple weeks ago that the North Carolina State Archives will sell duplicate microfilm for $12 per reel.

So, until then, I will go back through my files and histories to see if I can add any more local data to my timeline.

Documents which E-X-P-A-N-D our understanding of family history: Part 7

Mapping the trek from North Harlowe to New Bern, NC in 1853
In the past few weeks we've been examining types of documents which help us to piece together our ancestors' story. The starting point was the 1850 U.S. Federal Census where my husband's 2nd great grandparents, Isaac and Rhoda (Braddock) Carter,  lived with their children: Comfort, William, Mary Ann, Isaac, Nancy Matilda, Ananias and Zach.

The next phase took me to the 1860 U.S. Federal Census where the children were living as apprentices in the household of William Temple. . . . and that led to the search for apprenticeship records (1853). From the court order, another document was generated: the indenture.

Following a re-examination of the 1860 Census, I was able to form an idea of how the William Temple household composition might have segregated the children from the main family with the presence of an older black house keeper and a mulatto boatman.

In September 1853, the Justice of the Peace ordered the Sheriff "have before this Court at the next term, Isaac Carter, Nancy Carter, Ananias Carter and Zach Carter free person of colour, and grandchildren of Kelso Braddock and Sarah Braddock who live one mile from William Temple on Clubfoot Creek, Attest, J.G. Stanly" [Endorsed on the back, Justices vs. Orphans to December term 1853"].

The children, accompanied by William Temple, had to travel the distance from North Harlowe to New Bern, NC. Over land by mule wagon in the winter of 1853 would cover approximately twenty-eight miles, across the old Indian path to the post road, then by ferry across the Neuse River to New Bern.

A search of mileage and travel by mule cart estimates that they could travel at a rate of 3 mph for about 24 miles = 8 hours. At the end of this time the mules would have to be rested, or changed. Supposing they were changed. They would then have to travel another 3 miles. However, could it be possible that in the December cold, they might have stopped earlier...or pushed farther without stopping to make it there by evening, the night before their court appearance. Traveling with four children between the ages of 13 and 5 years old would prove a most trying experience.

To make such a trip in mid-December by boat is highly unlikely, even though such a direct route would cut ten miles from the trip. 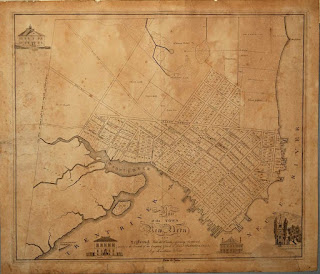 In order to get a more definite idea of the route to the Courthouse, I looked for a map of New Bern within that era. When browsing the UNC North Carolina Map Collection by County, the first map in the search results was a map of New Bern circa 1820s entitled,  A plan of the town of New Bern and Dryborough: with the lands adjoining contained within the bounds of the original grant to Dan'l Richardson in 1713.  The only other map close to 1853 was Map of the city of New Bern, circa 1866. Assuming that the city would be much changed following the Civil War, I focused on the former.

By zooming in on the map, I was able to print twenty screen shots on legal-sized paper and piece them together to form a full-sized map, measuring 36 x 44 inches. By assembling other background information gathered previously, I was able to locate the old Courthouse at the intersection of Middle and Broad Streets.

My next task will be to find photos of prominent buildings they would have seen along the way...
Posted by In Black and White: Cross-Cultural Genealogy at 6/21/2012 07:54:00 PM 1 comment:

Documents which E-X-P-A-N-D our understanding of family history, Part 6

Back to the 1860 Census...
My husband recently purchased the DVD collection of Alex Haley's Roots and Roots the Next Generation for me. I remember viewing it the first time around on my parents' black and white television. But years later, as many Americans did, I revisited it on television re-runs . . . and then again when it was released on VHS. That time around I borrowed it from Forbes Public Library in Northampton, MA, and viewed it with our daughter.

But this time, I took note of Haley's treatment of crossing into successive generations. Historical markers, such as the sharecropper houses on the former plantation, began to stir up imaginations within me about my husband's ancestors . . . especially in regards to young Isaac Carter and his apprenticed siblings.

Looking back to the 1860 Census once again . . . I have looked at it many times, and each time I take note of various details.

This time my attention was drawn to household composition:


I reasoned that in the absence of their parents and grandparents' care, they must have had one of two possible living arrangements:
As I now interpret this household composition, I am more inclined to believe the latter. It appears that Nancy Jones may have been the grandmotherly figure in their lives . . . the woman who cared for them.

Documents which E-X-P-A-N-D our understanding of family history, Part 5

What we can learn from apprenticeship records


After several weeks of diversionary family research, which took the form of investigating those who lived closest to the Carter and Braddock families, I have assembled more material for later, and returned to the research at hand...apprenticeship.


To the left is a photocopy from microfilm of the original instrument, the apprenticeship indenture, which I have transcribed below:


This Indenture, made the twelfth day of December in the year of our Lord one thousand eight hundred and fifty three between
the worshipful William J. Blackledge Esquire, Chairman and
Presiding Justice of the Court of Pleas and Quarter Sessions of the county aforesaid,
of the one part, and William Temple of the same county,
of the other part, Witnesseth that the said Presiding Justice, in pursuance of an Order
of said Court, doth put, place and bind unto the said William
Temple an orphan named Isaac Carter a free
boy of colour aged 13-- years, with the said William Temple
to live after the manner of an Apprentice and Servant, until he shall attain the age of
twenty-one years. During which time, the said Apprentice his said Master
faithfully shall serve, and his lawful commands gladly obey, and not absent
himself of his Master's service without leave; but in all things as a
good and faithful Servant shall behave.

And the said William Temple, doth covenant, promise,
and agree, with the said Presiding Justice, that he will teach and instruct, or cause to be
taught and instructed, the said Apprentice to read and write, and also the art and
mystery of a farmer, and constantly find and provide
for the said Apprentice, during the term aforesaid, sufficient Diet, Washing, Lodging and
Apparel, fitting for an Apprentice; and also all other things necessary both in sickness
and health, and at the expiration of said apprenticeship, will pay to said Apprentice Six
Dollars and furnish him with a new suit of Clothes and a new Bible.

An what comes next, you might ask . . . .
Imagination can take one only so far; and so, I started looking for every substantial clue which might lead me to concrete images to aid me in recreating the courtroom scene for my family history memoir.

What did that courthouse and that courtroom look like to the young Isaac Carter? Besides serving as the Presiding Justice of the Court of Pleas and Quarter Sessions, who was William Blackledge among his peers, and among his neighbors? And J.G. Stanly, the Clerk of Courts . . . what did these men look like? Were there any portraits made of either of these public officials? How many cases were heard that day. . . of what nature . . . and how long into the day did the young Carter children have to wait to have their case brought before the court?

At this point I have no answers; but, I will continue to pursue my leads until I come to some more concrete conclusions.

And what about the terms of this apprenticeship indenture? There is much to imagine there . . . at the age of twenty-one, receiving his new suit of clothes, six dollars and a new Bible. What ever became of that Bible? Did he take it with him when Isaac enlisted in the U.S.C.T. 14th Heavy Artillery in March of 1864? And did it ever pass into the hands of generations to follow?

Now you might begin to understand how I get departed from the state of my original course. I want to explore every avenue before painting his portrait with words.