Documents which E-X-P-A-N-D our understanding of family history, Part 4

What we can learn from apprenticeship records

Yesterday we looked at the 1860 Census for Isaac Carter and his siblings, who were apprentices in the household of William Temple, a 55 year old white farmer who lived nearby, and who owned a farm worth $1500 and personal property valued at $700. His wife, Rhoda, was a 47 year old woman who kept house. Their oldest child, Henry C., age 16, was a farm laborer; and their other son,William G., was 14 years old.

The gap between 1850 and 1860 was more than just ten years in a family's lifetime. The parents died...family dispersed. So, the next set of documents to search for were the apprenticeship records. Today we'll examine the first record in the file: a letter from Isaac's grandfather, Kelsor Braddock. Following is a transcription of that letter. All spellings are as found in the original document.


To the cort of Please and quarter
sessions Greeting

This is to certify that we Kelsor
Braddock and Sarah his wife
wishes to have the following named
children Bound out to Mr. William
Temple 1 Isaac Carter corlee of the 13 year
of his age 2 Nancy 10 years of age
3 Annias Carter of the age of 8 years
4 Zachariah Carter of the age of 5 years
This last named one has fits and is
But a perish charge
We the above named Kelsor Braddock
and his wife Sarah do certify that we
are the Grand Father and Grand Mother
of the above named Children and we
should have come to court but
for myself Kelsor am sick and has
been for Twelve months so that neither
of us can come to court  the Father &
Mother of these children have both
Deceased and the children is in a situation
to suffer.                             his
Kelsor         X     Braddock
mark
her
Sarah          X       Braddock
mark

Documents which E-X-P-A-N-D our understanding of family history, Part 3

In 1860, census enmuerators were given fourteen questions to ask citizens, with the only addition being Question 9: Value of Personal Estate.

This is the document which first started me wondering about the church’s influence on young Isaac Carter’s life. In the post entitled, Ministers andpreachers of Township 5: 1860: William Thomas, B.B. Culbreth & Pearce W.Gorell, I began to formulate questions for further church history research.

Documents which E-X-P-A-N-D our understanding of family history, Part 2

What we can learn from the 1850 U.S. Federal Census

In our case of Isaac Carter (the younger), we begin with the 1850 Census, the first census to enumerate each member of the household, not just the head of household. The 1850 Census asked thirteen questions:

Note: There were no relationships to head of household recorded. Sometimes the only indication that a household member was not part of the nuclear family was by a different surname. If all members had the same surname, the enumeration could still include cousins or other close members of the extended family.

To the left is the 1850 Census enumeration for several inter-related families. The family of focus is found on lines 37-42, and then on the following page, lines 1-4. This is the household of Isaac and Rhoda (Braddock) Carter.
Isaac Carter was a 45 year old farmer--a free black man. Note: This schedule is for Free Inhabitants only. According to this document, he does not own any Real Estate; and, neither he nor his wife, Rhoda, can read and write.

Rhoda, a 34 year old free black woman was born in North Carolina, just as her husband and children were.

While Comfort was enumerated as a male child of 18 years of age, we know from our family history and from subsequent documentation (See: 1860 U.S. Federal Census: Goodings, Craven, NC: Roll: M653_894; Page 9; Image 17: Silas Moore and "Comford" Moore) that she was actually female, and married Silas Moore in 1854 (See also: Craven County Marriage Registers, Craven County Register of Deeds, Book No. 1).

William was a 16 year old free black farmer. It is not possible to know if he and his siblings were literate as the question was only asked of citizens age 20 and older.

Mary, age 12, was a free black female child, born in North Carolina as were her parents and all her siblings.

These first three children were not named in the December 1853 apprenticeship records of the Craven County Court of  Pleas and Quarter Sessions.  Comfort was already married and of legal age. William would've been 19, but was already engaged in farming in 1850. At this time I am unable to locate him in the 1860 Census. Mary Ann married Benjamin Martin in 1856, but she would've been 14-15 years old when her parents died. Perhaps she was taken in by other family, and their grandparents, Kelsor and Sarah Braddock, had only taken the four youngest children. At this point, there is no way of determining. 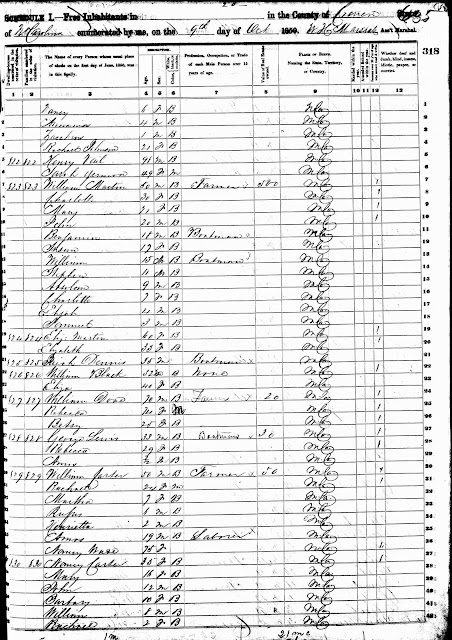 Isaac (9), Nancy (6), Ananias (4), and Zacchaeus (1) were all apprenticed following the death of their parents. The apprenticeship issue will be re-examined later now that I have copies of the actual indentures and related letters to the court. You will notice on Page 317B above that William Temple (lines 6-14), who becomes their master, lives only a short distance away.

When I first started researching my family history, my mentor (Elise Bernier-Feeley, local history and genealogy librarian at Forbes Library), started me out with searching the Census records for my parents and working my way back generation by generation. Then we pulled out regional and world gazetters, books containing maps and descriptions of the cities and towns where our ancestors lived.

It took me a while to assemble all these statistics. And then, I graduated to church records, city vital records and newspapers.

From there I progressed to land deeds and wills. . . and then, military records, i.e. service records and pension files.

Every now and then I re-approach an old "problem"...something I want to know more about that the dry facts available at the time cannot sufficiently answer. That's when I sit back and start brainstorming. I might read part of a novel or an historical memoir, perhaps watch part of an old film on TCM. I start to approach the "problem" as though it were a scene in a movie, telling the story as far as I am able...and when I am no longer able to give the specific points of back story needed, such as describing what the courtroom or the judge looked like, then I start searching for those specific details.

One great film I am always reminded of is the great narrative in the Orson Welles production of Jane Eyre.


Of course the film was based upon the book by Charlotte Bronte, and so reverting to the book to narrate the film is an effective tool. But what happens when you're trying to narrate a story for a book...what do you draw upon for details?

I started looking at the documents I had gathered. I noted the names and relations of each person mentioned in a will, land deed, or pension file. I started collecting their documents to see how the group interacted. But then I was drawn to the one name that appeared at the end of each of these documents...J.G. Stanly, Clerk of Courts.

Who was J.G. Stanly? And then I started looking at the names of the judges...who were these men? Where did they live? What influence did they carry? And what was their attitude toward Free Negroes and apprentices?

In the days to come, I will begin transcribing some of these documents I have gathered recently in order to effectively narrate the story of young Isaac Carter.

In the midst of rifling through papers, clicking back and forth between browser tabs, and making a list of all the documents I need to order from the New Bern-Craven County Public Library's Kellenberger Room and from the Craven County Register of Deeds, I received a message about a special event...

...an event which commemorates another which occurred 150 years ago


...one that made a lasting impact upon Isaac Carter's future...


This morning I received a most welcome email from John F., who sends me the monthly Fort Macon Dispatch. This particular message, however, shared the links to two videos and a photo album of the special events which took place at the fort this past month, commemorating the 150th Anniversary of

The Siege of Fort Macon.

My husband and I had first visited Fort Macon in the summer of 2007, and since that time I was able to order a copy of Isaac Carter's Civil War Pension File (of which I still have much to work on by way of transcribing and organizing collateral research).

Earlier in the year I had been working on a New York Times article entitled Another Glorious Victory, dated March 19, 1862, detailing the Battle of New Bern (March 14, 1862), which immediately preceded the Siege of Fort Macon.

One of the questions I had contemplated was if Isaac's family could hear the Union flotilla as it sailed up the Neuse River and passed Clubfoot Creek where his family lived. They sailed at night in a thick fog and rain. They certainly would have heard them, but what could they see if anything?

John shared the following two links, which led me to the final video shared here.

This link will take you to: The Battle of Fort Macon Reenactment Slide Show. (When you are finished viewing the slide show, click the Back button to return to this page.)

The opening of this final video gave me a good idea of what it must have looked like as the guns bombarded the shoreline in the night sky.

I hope this helps spark your imagination
of what it must have been like
as much as it has for mine.
Posted by In Black and White: Cross-Cultural Genealogy at 5/01/2012 12:52:00 PM No comments: