Are there any African Americans in Mayberry?

This was the question that my husband's cousin had once posed. She had done a Google search and discovered that there had been extras in some episodes of the Andy Griffith Show...but that was it.

So, I decided to do a search for myself and this is what I found. Larry Cebula wrote a post on his Northwest History blog entitled,

Why come there ain't no black people in Mayberry?
While Cebula mixes satire with real history, a family history visit to Mount Airy, North Carolina might present some...let's say...interesting...encounters.
(Explanation to follow.)
The aforementioned post contains a link to a series of photos which point out African American extras from the Andy Griffith Show....seen, but not heard.
During the course of conversation, I had relayed to our cousin that on our last visit, we had inquired of an Historical Society member at the Mount Airy Museum of Regional History how we could locate the grave sites of those family members whose death certificates and obituaries I had found. We were told to go to the mortuary listed on the certificate.

"They have maps of all the cemeteries in town," we were informed.

Walking through the door of the funeral home with my husband following, I encounter a feeling I had never experienced before...a certain tension in the air, which my husband could not distinguish. A group of men were talking in the back corner of the room behind a counter, and I interjected, "Excuse me, gentlemen. I was told at the museum that you had maps to all the cemeteries in town."


"Oh, yes. We have maps. Which cemetery are you looking for?"

The men looked back and forth at each other, quietly asking one another about it, and then the spokesman for the group said,


"No. We only have the maps for the white cemeteries. You'd have to go to ----- Funeral Home for maps of the black cemeteries."

"Well, can you tell me how to get to these cemeteries?" I asked.

Since we were there on a day trip and the time was slipping away, we decided to wait until our next visit to find that funeral home to make an inquiry. But, as it turned out, we didn't need to make a stop there because on this visit, our cousin unveiled the mystery...

Now I could tell why she wanted to take her truck instead of having us follow her in our car. The entrance and exit of the cemetery is situated on very rough and rocky terrain. But there, close to the front of the lot was our family connection's gravestone.


2nd Cousins reunited "after one hundred years"...
No, there are no more centenarians in the family that I'm aware of. These cousins descend from common ancestors, Isaac and Martha Ann (George) Carter: from two brothers, Grandpa "Lousha" and Grandpa Hezekiah Carter.

We hope to have many more visits together as we become
better acquainted and work together
to solve the puzzle that is our bond of shared family history.
Posted by In Black and White: Cross-Cultural Genealogy at 2/26/2012 10:54:00 AM 3 comments:

Those Places Thursday is a Geneabloggers writing prompt that encourages us to think back to the places where our ancestors lived, worked or spent time.

I am looking forward to a mini-getaway coming up for us in the early part of next week when we will go back to Mount Airy, NC for our third visit. This time, however, will be different than the last two times.


First we visited the town as curious tourists... 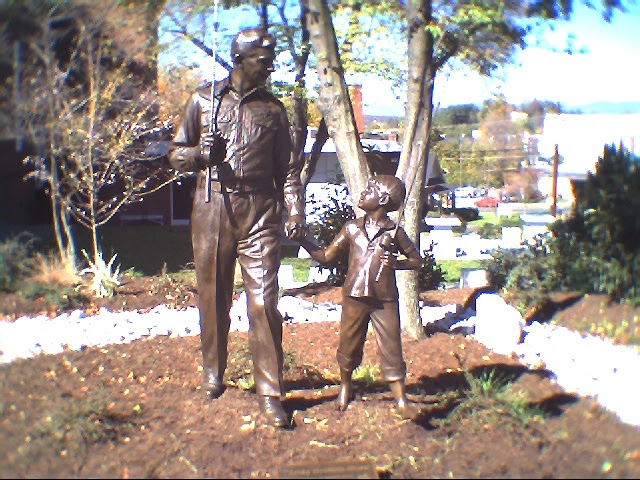 ...Yes, this is the home of Mayberry RFD and the Andy Griffith Show...

The second visit took us to the Mount Airy Museum of Regional History,
to Mount Airy Public Library to print microfilmed obituaries,
and sent us on a goose-chase to try to discover the whereabouts of African-American cemeteries.
Since that last visit we were blessed with making a connection with living cousins...the great grand niece of my grandfather-in-law!
That would make her and her sister our second cousins once removed...
...and her mother (who is still living) is our second cousin!
This branch of the Carter family extends from Hezekiah's oldest brother, Elisha Carter, who as family legend has it, fled to Berrien County, Georgia because of some trouble he had gotten himself into (considering the times, it is assumed that there might be some racial tension involved) sometime between 1880 when he was an eleven year old son living in his parents' household in Township 5, Craven, NC, and 1900 where he appeared in Nashville, Berrien, GA as a 34-year-old Turpentine Dipper with three children. His wife, Millie (Anderson) Carter, was already deceased.

Hopefully some questions will be answered by this trip, but it seems that the descendants of Elisha Carter also have some unanswered questions about their ancestry. Perhaps this connection will benefit both our research endeavors...but most of all,

two branches of the family will be reunited
after over one hundred years of separation!

Day 9 already?!?
Where did the time go? I have been so wrapped up with the demands of the day job lately that writing has been a struggle....but, I have 1,081 words written so far!

Please participate in the Family History Writing polls...
There are still so many questions, and I am finding that the farther I go with this the more questions I have:
Also, I know from a vision I once had about the formation of this book that I need to begin with the church history. However, there are two points in the story where that could begin:
The value of a writer's forum
Besides the daily writing prompts, one of the greatest assets of participating in this challenge has been the Forum. Most of the issues discussed evolve from the topics in the daily emails. However, sometimes writers have started their own topics of discussion which enlist the support and comments of their fellow family history writers. This has proven invaluable! Not only am I organizing and writing, I am also learning about writing software applications such as Scrivener, and photo editing in Picasa; and discovering new books, such as Oh Beautiful: An American Family in the 20th Century.


It is in the forum that we are able to share
Our fears and encouragement,
Our frustrations and successes....
So, can I write a book in 29 days?
With twenty days left in the challenge, and with the tug-of-war that I find myself in between Work Life and Writing Life, probably not...

But, I do anticipate:

Perhaps somewhere along the way I may discover that the story has taken on a new dimension all its own which would otherwise have been...