Amanuensis Monday: The Will of Thomas Hyman

Welcome to the first Amanuensis Monday as we focus on the Descendants of Abraham and Rhoda (Whitehead) Hyman.

For those who may be joining us for the first time, you may wonder what is "Amanuensis Monday?"


"amanuensis: one employed to write from dictation or to copy manuscript....Latin, from (servus) a manu slave with secretarial duties. First Known Use 1619." [1]


Each Monday we will examine a document that guides us on our quest for the origins of the African American HYMAN family in Craven and Carteret Counties, North Carolina.

For the purpose of maintaining the integrity of our research, we must approach each individual, each relationship, as new information. We must set aside any biases or prior beliefs about the family so that we can reconstruct the family group within the context of its society.


The Will of Thomas Hyman

In order to do so, we must first look to the will of Thomas Hyman [2], the white owner of those recorded in the Census as slaves, but believed to be indentured servants by family historians. 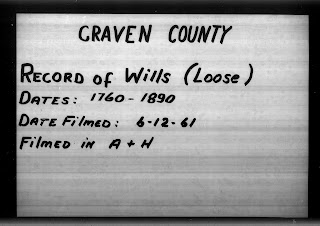 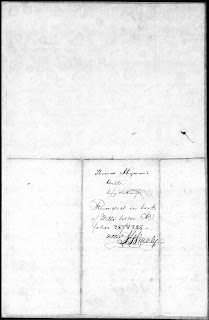 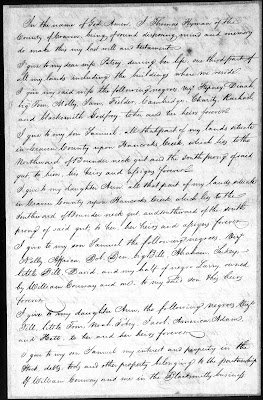 In the name of God, Amen. I Thomas Hyman of the County of Craven, being of sound, disposing mind and memory do make this my last testament.

I give my dear wife Patsey, during her life, one third part all my lands including the buildings where we reside. I give my said wife the following negroes, viz. Stepney, Dinah, big Tom, Molly, Sam, Fielder, Cambridge, Charity, Rachael, and blacksmith, Godfrey, to her and her heirs forever.

I give to my son, Samuel, all that part of my lands situate in Craven County upon Hancocks Creek, which lies to the Northward of Bounder neck gut and the south prong of said gut, to him, his heirs and assigns forever--

I give to my daughter Ann, all that part of my lands situate in Craven County upon Hancocks Creek, which lies to the Southward of Bounder neck gut, and southward of the south prong of said gut, to her, her heirs and assigns forever.

I give to my son Samuel the following negroes, Viz. Nelly, Affrica, Bob, Ben, big Bill, Abraham, Sukey, -- little Bill, David, and my half of negro Larry, owned by William Conway and me, to my said son & his heirs, forever.

I give to my daughter Ann, the following negroes, Viz., Till, little Tom, Noah, Tobey, Jacob, America, Adam and Hett, to her and her heirs forever.

I give to my son Samuel my interest and property in the Stock, debts, tools and other property belonging to the partnership of William Conway and me in the Blacksmith business 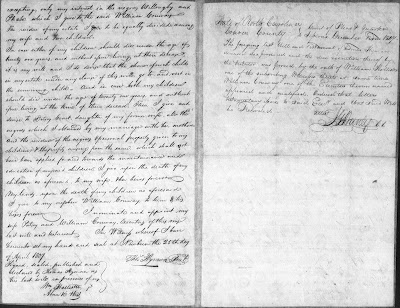 excepting only my interest in the negroes Willoughby and Phobe, which I give to the said William Conway. The residue of my estate I give to be equally divided among my wife and two children.

State of North Carolina   Court of Pleas & Quarter
Craven County                Sessions December Term 1807
The foregoing last Will and Testament of Thomas Hyman deceased was produced and the due execution thereof by the testator was proved by the oath of William Hollister one of the subscribing Witnesses thereto at same time William Conway one of the Executors therein named appeared and qualified. Ordered that letters testamentary issue to said Execr and that said Will be Recorded.
Attest
J.G. Stanly, C.C.